An 11th consecutive loss to Adelaide in Adelaide and for all intents and purposes, North Melbourne’s season is over.

The afternoon at the Adelaide Oval played out as a 120-minute confirmation of everything we’ve learned and known over the course of 2018.

In a six-minute last quarter burst, North almost won the game. When the midfield is on top and can give the forwards good enough supply – and that’s all it needs to be, good enough – North’s best can compete with anyone.

– Significant improvements in key areas of the field

As Majak Daw took a string of defensive half marks during the first three quarters, it struck me how most (not all, unfortunately) of the conversation around him has moved past the novelty phase and now recognises his importance to a side playing well.

Tall forwards rarely dominated against North in 2018, and a large part of that was due to Daw’s presence alongside Robbie Tarrant and Scott Thompson.

In the midfield – while everyone is in agreeance the midfield still has a way to go – we all should also agree on the strides forward it has made in 2018.

With Paul Ahern, Jed Anderson and Jy Simpkin, North has found three regular contributors for the future. Luke Davies-Uniacke has also shown enough to suggest he’ll fit right in after another pre-season or two plus more exposure at the top level. Trent Dumont has also blossomed into a consistent contributor.

Todd Goldstein also has returned to a level very close to his 2015-early 2016 peak; I’d have him as the third best ruckman in the competition this season behind Max Gawn and Brodie Grundy.

– Changing the narrative around on-field fortunes

It’s well known how North is looking to lure Jared Polec and Andrew Gaff this off-season. If the club was a basket case on-field this year, it would have made the selling job on those two midfielders exponentially tougher.

Now when Polec and Gaff look at North, it won’t take too much of a stretch to illustrate how North isn’t that far away from contention – an argument which would have been exceedingly tough to make if the Roos only had four or five wins up to this point.

Most of the post-match reaction from considered neutrals was centred around how North had exceeded expectations. It’s a much better position to be in than ‘lol they’re useless’, which has been tweeted and posted about several other clubs numerous times throughout the year.

Think of 2018 as Year 1 in a midfield rebuild. With the introduction of the aforementioned trio in Ahern, Anderson and Simpkin; North’s first layer now looks more suited to the modern game than it did in 2017.

In 2019 it hopefully improves again with the addition of outside run, balancing out the current strengths on the inside.

Then in 2020, the addition of arguably the premiere midfielder in the league tops it off.

All sounds good on paper, right?

– Need more outside players to be able to stop momentum

As touched on earlier, the hope is Polec and Gaff’s dual arrivals will remedy this problem – and it could also have the effect of reducing North’s reliance on Ben Jacobs.

North was 8-5 with Jacobs in the team this season, and is just 3-5 without him. As we’ve discussed so many times, his presence gives the rest of North’s midfield more margin for error in their respective roles.

But if there’s more outside run, it – in theory – should help North defend when opposition sides are able to win contested ball and then get on the move. As we’ve seen the last two weeks in particular, it’s not an area North excels in.

When North has played against undersized defensive units, it’s exposed the lack of small forwards who are a genuine threat around goal.

Normally North tries to create as much space around Ben Brown, Jarrad Waite and Jack Ziebell, correctly theorising those three will be dangerous enough to win more contests than they lose. It explains part of why the small forwards don’t kick goals regularly. They’re simply not asked to be in a position to do so.

But when opposition defenders have to put numbers back to support undersized defenders, it naturally creates more spillages and the ball hits the ground more often. Teams are willing to take the risk of doing that close to North’s goal, because they’re banking on their small defenders running the ball out more often than not.

I’d imagine this will be one part of the off-season shopping list, whether through trade, free agency, national draft or rookie draft.

And one final note. I believe Andy Otten owes Ben Brown breakfast after their exceedingly close and intimate afternoon. 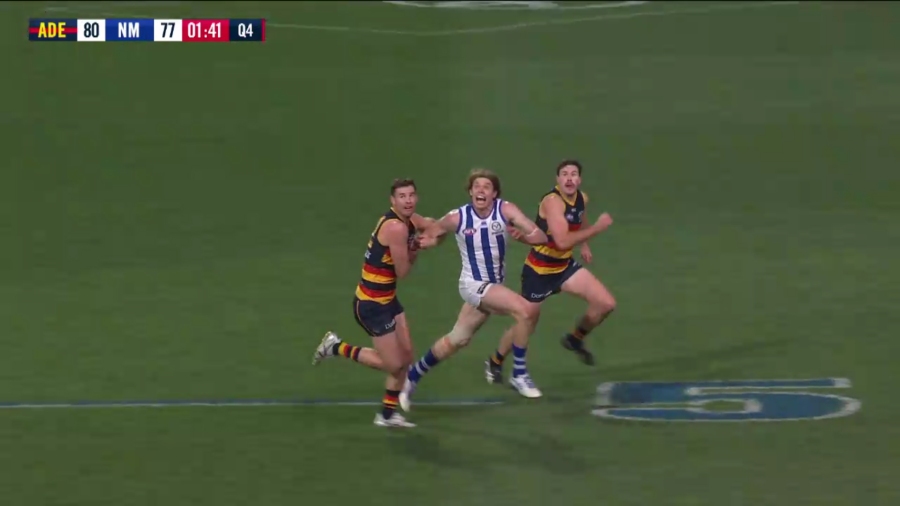 So where to for next week against St Kilda? As a starting point, you’d imagine there’ll be a handful of changes and players rested.

The likes of Ben McKay, Declan Mountford and Nick Larkey are all without a senior game this season, while Luke Davies-Uniacke and Paul Ahern would benefit from an extra run at AFL level.

Do you gain anything from playing experienced players who are definitely going to be at Arden St next year and have likely been battling through the regular niggles which restrict everyone at this time of year? The sentimental side of me would like to see Scott Thompson and Jarrad Waite out there, just in case it’s their last games.

But all the above clearly pales in comparison with objective number one, which should be Operation Coleman.

One thought on “Round 22: Season over”