Six years of a mandatory filter before tweeting about football on social media came in really, really handy on Sunday. Really handy.

But what we’re going to avoid today is delving into the normal clichés which make appearances like clockwork after a disappointing loss. You know the ones. ‘Didn’t want it enough’. ‘Club getting ahead of itself’. ‘Poor coaching’. ‘No leadership’. ‘Pick different players’. If you’re looking for anything along those lines, then this is not the place for you.

What we are going to tackle is why the third quarter played out the way it did. Why it was a disaster of monumental proportions and how the Bulldogs were allowed to get the ball to the outside time and time again. 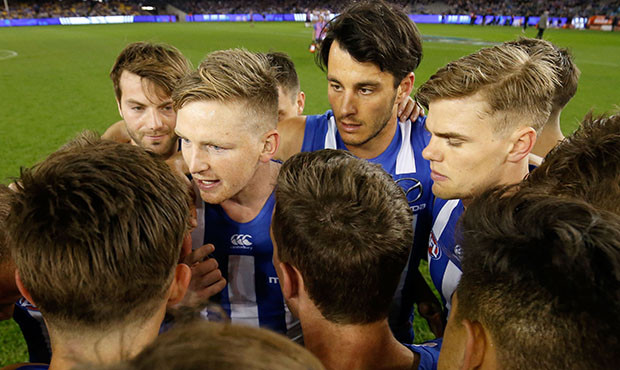 As we’ve discussed countless times throughout the season, North’s number one flaw is its lack of outside run; both what they’re capable of offensively and how they cope with defending against it.

It means the number one priority every week is to stop the opposition from getting the ball to the outside from stoppages and contests. In the first half North was able to mostly stop the Bulldogs from getting this going, thanks to a combination of pressure and the Bulldogs opting to move the ball safely – largely in straight lines, and often long.

This changed after half time.

If the Bulldogs had continued to move the ball the way they did in the first half, North would have cruised to a 5-6 goal win.

Instead the Bulldogs looked to move the ball shorter by foot and run and carry more with handball. When they won the ball, they’d get it to the outside as quickly as possible, and then immediately look back in the centre where the space had opened up.

It meant the North tall defenders – Robbie Tarrant, Scott Thompson and Majak Daw – no longer had the luxury of floating across in front of packs for intercept marks.

Instead the Bulldogs were running at North’s defensive setup, which presented a whole different set of challenges.

Here is one of many examples. Dale Morris looks inside, Ed Richards runs, carries and handballs as a wave of teammates run through the middle. Suddenly they’re just about in range of home, thanks to aggressive ball movement, before Billy Gowers sets sail from 50.

However, this shift in ball movement wouldn’t have mattered if North had set up well to prevent it.

Reason #2: North getting caught around the ball

For those who read last week’s wrap, you’ll remember how we discussed Brisbane’s game plan of committing numbers around the ball at the contest.

North’s usual, week-to-week strategy is not to overload and commit those same numbers to the immediate vicinity of the ball. Yet if you were watching North for the first time on Sunday, I’d imagine you’d think otherwise.

A short time later, here’s Jason Johannisen about to pick up the ball while surrounded by four Kangaroos – all while leaving him an outlet. A couple of quick handballs and the corridor is vacant for the Bulldogs to stroll through.

Another example, in gif form, of how the Bulldogs recognised the numbers North had around the ball, and wanted to get it outside as quickly as possible.

We’ve established how the Bulldogs set out to play. Aggressive – short – ball movement, plenty of run and looking to use the corridor at every opportunity.

When you’re facing a side in that kind of mood, it makes how you use the ball even more important, because every mistake will be punished.

Two of the Bulldogs’ first three goals came from easily preventable North mistakes. First Marley Williams failed to pick up a simple ground ball – although he did still appear affected from a knock moments earlier – before Robbie Tarrant was caught holding the ball when he didn’t take the easy first handball option.

Lin Jong had a set shot from 45 which barely squeaked over the line – of the four Kangaroos close by, only Sam Wright was close enough to attempt to rush it through when a coordinated effort would have seen it punched over. The aforementioned gif of the Gowers goal came from a direct turnover.

That is a long list of very preventable occurrences. And each one of them gave the Bulldogs more and more confidence. Like a snowball rolling down the hill, they picked up momentum with every passing passage of play until they were irresistible.

And just to cap it off, there was one more element to the quarter to really rub it in.

I understand how it reads like a cop-out to chalk part of an eight-goal quarter down to bad luck. And it’s definitely down the list of importance compared to the previous three reasons.

However, when it goes wrong, it really goes wrong. And that includes things out of your control.

Take the Bulldogs’ first goal of the quarter for instance. A 50-50, two-on-two contest turns into an easy stroll inside 50 after Williams was on the end of a glancing blow right in the sweet spot which kept him down.

Or a poor centre bounce, followed by a push in the back and unpaid throw all in a matter of moments, which led to a Bulldogs centre clearance and scrambled goal.

There was also a rushed Josh Dunkley kick out of a stoppage which landed straight in the hands of Toby McLean within range.

In many ways it harks back to a few of the close finishes throughout the season. One of my common refrains has been how sometimes a bounce of the ball or a lucky disposal goes your way and you get to take advantage.

Then again, sometimes it doesn’t go your way and you pay full price.

What did it all mean in the end? The most points North had conceded in a quarter since Round 21, 2016, and left needing to win both remaining games while hoping for a couple of results to go its way.

It sounds improbable on a Monday morning when everyone is licking their wounds, but isn’t anywhere near “So you’re telling me there’s a chance?” territory.