How things can change in three weeks.

At Giants Stadium, North Melbourne stopped GWS from getting outside, used the ball going forward better and better as the game went on, and emerged with appeared to be genuine belief.

Exactly zero of those things were on show against the Bulldogs, and we’ll focus on explaining that today. Because we could actually see what was happening!

For those who read last week’s post, right at the very end I mentioned how the game was likely to be decided by how well the Bulldogs could spread on North and get outside.

So this, in the first 20 seconds of the game, is not exactly what you want to see. 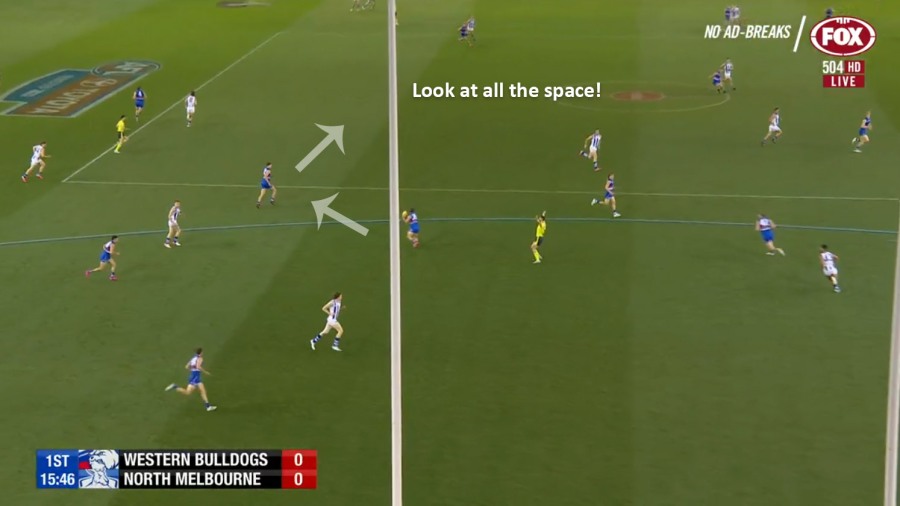 Or this, later on in the first quarter with everyone trailing Easton Wood. Much respect to the former captain, but when I think of Bulldogs players bursting from a heavily contested pack he’s well down the list. More along the lines of taking bulk intercept marks, but we’ll get to that part eventually.

Right at the end of the first half, Tim English marks deep in defence. Normally from this point it’s tough to get out quickly because teams set up to cover any quick movement out of the back 50.

Not so much this time. Instantly Bulldogs go and North is all at sea. If this was a Bulldogs blog it’d be focusing on the positives from Keath, Williams, Schache and Bruce to transition quickly. But it’s a North blog so the point is how there’s no excuses to allow transition so easily, especially right on the doorstep of the siren.

The frustrating part about the transition is how North can clearly stop this type of movement, because we’ve seen it before. Expecting it to happen 100 percent of the time is of course unrealistic, but it was barely passing the ‘occasionally’ mark against the Bulldogs.

It becomes even more of a crucial point when North isn’t taking – or making – opportunities inside 50. In one way it was a step forward from last week with the ball actually entering the area regularly.

However, the first half yielded 21 inside 50s for just five scoring shots, an anaemic result. For much of the time since Luke Beveridge took over as coach of the Bulldogs, he’s had a simple strategy against North on getting extra defenders to intercept the ball in the air, focusing on picking off entry after entry.

When North can’t get clean ball or maintain focus on lowering eyes when going forward, naturally said strategy pays off in spades.

While there are numerous examples we could use to demonstrate how this unfolded, for the sake of relative brevity let’s focus purely on what poor Ben Brown had to deal with; the unfortunate soul targeted with below par disposal time after time; not only inside 50 but all over the ground.

To expect silver service is unrealistic given pressure around the ball and the ways teams focus on minimising Brown’s influence. Even if it tops out at average, that’s still good enough for Brown to provide a threat. Instead, he has to deal with service even the best key forwards of all time would struggle with.

Naturally, Brown’s confidence dips as he’s forced to subject himself to making the best of a bad situation, leaving North with the worst of both worlds – sub-par entries and a key forward lacking conviction.

What we saw in that video is a world apart from the considered, clever movement on show in Round 2 against the Giants.

With each failed entry here in Round 5, the frustration builds because there’s no reward for getting close to goal. Combine it with an inability to stop Bulldogs spread and it’s a dangerous concoction which will quickly drain any belief. Eventually – much like the Giants – North all but tapped out, making for some dispiriting passages of play during the second half.

Of the group, one in particular stood out. A Bulldogs forward 50 stoppage saw Ed Richards completely unmarked for its duration, finishing with a goal so simple it spoke volumes.

Hub life for the next … however long should allow the players to renew focus given the past week and all the locked down suburbs in and around Arden St.

Two consecutive night games at Metricon Stadium may be just the tonic needed for North to rediscover what makes it tick. Given conditions on the Gold Coast under lights, it’s all but certain to feel like wet weather games against Essendon and Richmond.

Whether it increases or decreases North’s chances of winning in that fortnight remains to be seen – I’d lean towards the latter – but simplified football looks to be what it needs right now.

At its core, the system Rhyce Shaw wants to play clearly works and suits this squad of footballers. There’s enough evidence to prove it. All that’s left is to refresh and refocus on how to carry it out.

5 thoughts on “Round 5 v Western Bulldogs: Back to square one”