Perhaps the match didn’t unfold exactly how most expected it to, but in the end the result was as predicted – Richmond are the first to progress through to the Grand Final.

It was an intriguing battle between two systems; the fine-tuned chaos of Richmond against a Geelong outfit having to adjust to the biggest match of their season without their fulcrum.

Before we get into how the game unfolded, some background to Chris Scott’s pre-match comments during the week. Most people wrote it off as standard Scott behaviour, but I have a different take on it.

If you were living under a rock during the week and missed what Scott said, here’s a snippet:

Our players aren’t looking back and thinking we can’t beat them. We do have a method that troubles them. I don’t think we were anywhere near as good a team as we are now last year and I think they were a better team last year than they are now.

They have been, especially in the second half of the year, a team that has overwhelmed some teams around the midfield and looked dangerous when they have got it forward. I’m not sure their numbers around the contest reflect the dominance that some people think they have.

As someone who was up close to every single Brad Scott press conference for six years, the tone accompanying this comment was extremely familiar.

If Chris is anything like Brad – and we can all agree there are more than a few similarities – those words weren’t off the cuff.

While Brad usually wouldn’t be as forthright as this, there were plenty of occasions where the manner of his comments leading into a game showed there was great confidence in how the team would set out to play. The clearest example was after the 2018 season opener, leading into Good Friday when Brad was asked whether North would be ready for St Kilda.

So when Chris said this, my immediate thought was that there must be a high level of belief and trust in Geelong’s plans.

And we saw why in the first half. 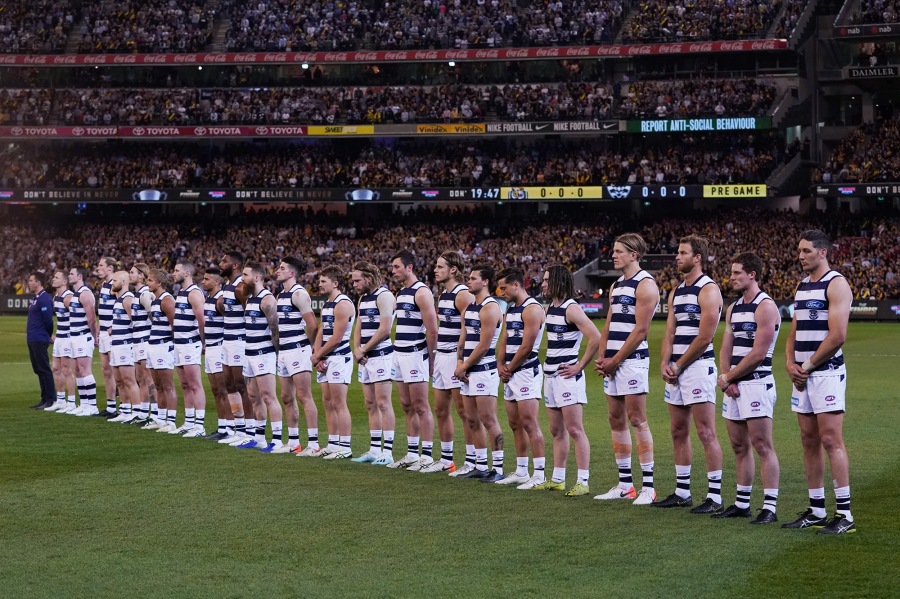 All game styles tread a fine line between success and failure, especially in a game with this much on the line.

The aims for Geelong were simple on paper, albeit much tougher to execute on field. Without Tom Hawkins, the challenge was figuring out enough avenues to goal to scrounge a winning score in perfect conditions.

It was here where one of Scott’s pre-match lines is especially useful to reference:

“I’m not sure their numbers around the contest reflect the dominance that some people think they have.”

As we discussed in Richmond’s Finals Dossier, the Tigers aren’t a top tier contested ball team. It means sides have the opportunity to dictate tempo if they can gain the upper hand around the contest.

While Richmond usually cover it up by their field defence making it hard for the opposition to move the ball, if their pressure is off it leaves them with little room for error.

It was most definitely off during the first half, and Geelong gladly took advantage to land the first punch.

That’s Gary Ablett allowed to waltz around a pack at a forward 50 stoppage, just for the record.

Nevertheless, while winning contested ball to establish tempo was the first non-negotiable for the Cats, just as important was finding a way to move the ball without the presence of Tom Hawkins.

This was where Geelong’s mantra of control proved so useful. Their tightrope during the season has been the right balance between using possession to attack and defend, and they struck it perfectly in the first half.

Where possible, Geelong looked to change the angles without putting the ball in a position to be turned over, all the while pushing numbers forward to neutralise the Richmond defence’s aerial dominance.

Therefore when the Cats did go inside 50, all the numbers made it incredibly tough for the Tigers to intercept mark. It’s much easier to take a grab when it’s a 2-on-1 or 3-on-2. Good luck when there are eight, nine, ten players flying for the Sherrin with Geelong’s main aim simply to stop a Tiger from marking.

Then when the ball did hit the ground, the Cats’ small forwards and midfielders were waiting to pounce. A handful of clips to illustrate it all:

If it wasn’t for inaccuracy – a cruel twist given how Geelong’s first half of the season was typified by nailing everything within range – the game could have almost been out of reach at half time.

As it stood, 21 points wasn’t an accurate reflection of how the game had played out, especially given Richmond’s inability to move the ball.

Once Geelong had it locked in their forward half, their defensive unit was able to set up immaculately behind the ball as per usual.

The Tigers looked like they had no answers, particularly in the second quarter. With their handball options largely taken away, too often they resorted quite simply to options which weren’t on. A selection from many:

Save for the inaccuracy, everything had worked perfectly for Geelong in the first half. But the gap they put on the Tigers wasn’t reflective of their dominance in general play.

To state the obvious, Richmond are a better team than Geelong, and they had extra gears which the Cats didn’t let them reach in the first half.

It meant the question coming out for the second half was around whether Richmond could play well enough to find them, and the answer came almost instantly.

In the first few minutes of the third quarter, Richmond’s pressure was back at peak levels. Turnovers were forced, goals were kicked and the Cats’ first half advantage evaporated.

Note how in all three of these examples, Geelong win first possession but cough the ball up under relentless Tiger pressure.

That pressure – higher up the field, more intense all over the ground – meant Geelong weren’t able to win the ball as easily or shift it around while controlling tempo.

It set the tone for the entire second half. Geelong, whether spooked by the early stages or lacking the confidence to stick with the first half style under increased strain, reverted to their most defensive tendencies.

Straight line football against Richmond is death, and it takes a miracle to put any scoreboard pressure on playing that way.

Without Hawkins, and with Lachie Henderson unable to provide the same gravity in the forward half, Geelong looked toothless when unable to flick the ball around and change angles.

While the first half provided options to get around the initial Richmond defence to lock the ball inside forward 50, the second half was a near endless repeat of long high balls down the boundary line to the wing, where Richmond mopped up time and time again. In the interest of saving people from watching minutes of long high balls, there will be no video clips of those.

Then because Geelong weren’t able to control the tempo, the defenders weren’t able to set up with the same authority from earlier in the night, which in turn allowed Richmond more time and space to deliver when going inside 50.

Geelong’s 32-19 advantage for inside 50s in the first half flipped to 37-19 Richmond’s way after the main break, and there was a sense of inevitability – despite the margin – the longer the second half went.

Ultimately the game was a neat encapsulation of both sides. Geelong are a good side, but a level below the elite. Meanwhile Richmond are the best side in it, but with a clear road map in how to be beaten – if the opposition is good enough to do it for four quarters.