Watching North Melbourne’s relatively routine win over St Kilda, I couldn’t help but cast my mind back to the very first pre-season game against the same opponent.

On that day in March, I’d imagine very few people could have predicted the sheer amount of change which would envelop North over the coming months.

But even though change is difficult, sometimes it’s necessary as a circuit breaker. There’s still plenty more of it to come, but Sunday at Blundstone Arena was a sign that things are becoming clearer by the week.

And I’m always open to suggestions for posts and topics you’d like to see covered. Feel free to hit me up any time. I know this part is copied and pasted every time but I’m always genuinely grateful people choose to read. Also, there are a lot more views coming from Facebook lately, so shout out to whoever’s sharing these.

Perhaps nothing illustrates that change as clearly as one passage of play from the first quarter, which North didn’t even score from.

The following is a clip from a centre bounce, where St Kilda wins possession and is theoretically well placed to take advantage of 6-6-6. I’d bet significant hypothetical amounts that they would have if it was earlier in the season.

But here North forces a turnover and then goes inside 50 immediately, showing how everything can look so simple when players are well drilled and brimming with confidence. Let’s run it through once:

Now let’s break it down.

We all know about North’s centre bounce defending woes to start the year. Teams won the ball, got it to the outside, and they were off to the races. Or the scoreboard, same thing really.

Since Rhyce Shaw took over, the clear focus on manic pressure has meant getting the half forwards around the ball as quickly as possible, ideally stopping teams from getting to the outside if they do win possession from the centre.

So, in other words, a situation exactly like this. Even though Marshall is being tackled, he’s got numbers in space, he’ll get hands free to flick to Dunstan, and the Saints are in good shape.

By the time Dunstan does take possession, North’s already had a subtle win.

St Kilda haven’t been able to go forward, or even sideways. They’ve been forced backwards, with Goldstein, Cunnington and Anderson forming a wall of sorts.

All the time, just off screen, the half forwards are advancing and closing in. 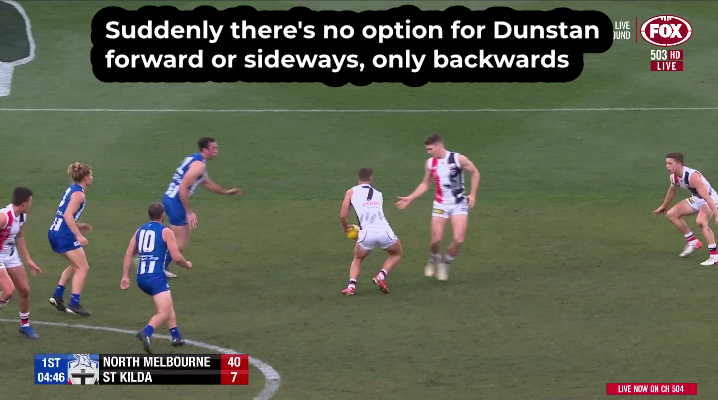 And now they’re here. Kayne Turner and Mason Wood have arrived, neutralising any advantage St Kilda had from winning first possession at the centre bounce.

Note how Cunnington and Anderson aren’t in frame anymore and that’s just as crucial in its own way.

It’s this two-layer balance between numbers around the ball, while hanging back to protect the outside, which is crucial to any good midfield.

These type of efforts largely go unnoticed – because it’s hard to pick up with TV cameras – but they’ve been a big part of recent wins.

From a position of strength, now St Kilda are scrambling wildly just to keep possession.

But if a pressure plan is going to be carried out successfully, it requires multiple efforts. This is where Goldstein and Wood come into action.

Dunstan is now out of the picture, as is Marshall and Billings. Wood has wrapped up Acres, and there’s only one outlet remaining for the Saints.

Savage is waiting on the outside for Acres to get the handball out. But Wood applies the textbook tackle, and Goldstein swoops in to intercept.

Now with possession, Goldstein strides forward and Wood – with another effort – is alongside him to provide an option.

In many ways, Wood is the unsung hero of this play. He’s come up from the forward 50 to get around the ball, applied the tackle and then allowed Goldstein an easy handball – which the ruckman delayed just long enough to give Wood as much space as possible.

While Wood’s kick forward didn’t result in a mark, the fact that he and Turner had come up the field – drawing opponents with them – meant the remaining North forwards had plenty of room to work with.

It’s the process which worked, and the results often follow. The last five weeks have told the story on that one.

One play, which North didn’t even hit the scoreboard from, encapsulated all the positive change which Rhyce Shaw and his method has brought.

From a situation and rule which was causing the same group of players endless amounts of grief earlier in the season.