It’s much easier writing these things after a win, let me tell you.

In Round 2 and 3, there were signs – glimpses – of how North Melbourne was trying to put it together.

(Let’s pretend together that Round 1 didn’t exist)

On Saturday night they were able to put it together for the longest period yet, helped by a bafflingly passive Adelaide and some smarter team selections.

The game essentially boiled down to three areas: 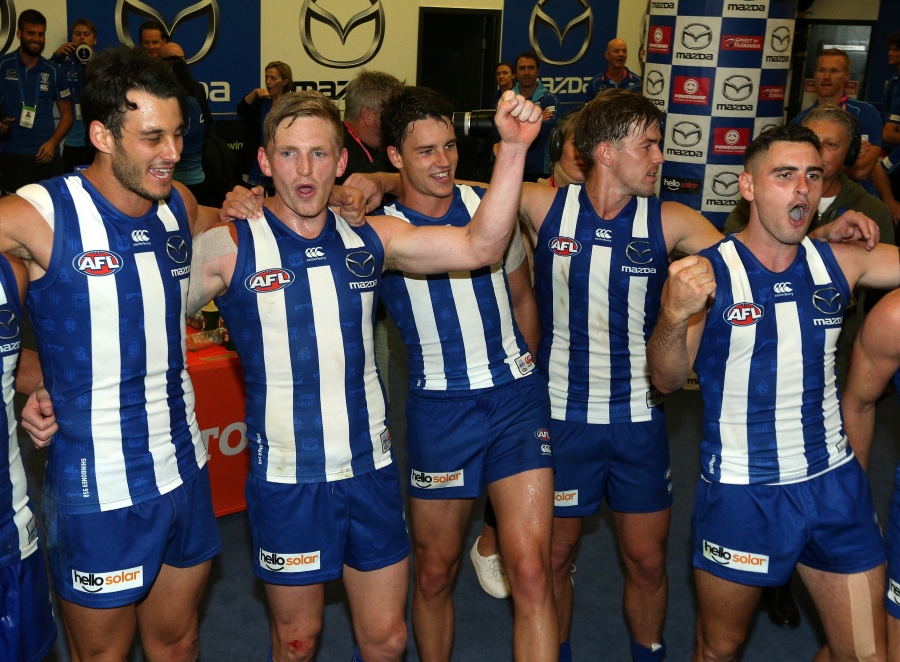 And I’m always open to suggestions for posts and topics you’d like to see covered. Feel free to hit me up any time.

We didn’t see that at all in the first three rounds. (Slowed down on purpose to watch the desperate attack on the footy) Far be it from me to claim Anderson is the cure to all North’s midfield defending woes, it’s the presence he brings around the ball which lifts his teammates.

By essentially bringing in Anderson and Zurhaar for Tyson and McKay*, the net effect was a much-improved defensive presence once the ball hit the ground.

No surprise it then led to a better pressure game from Turner, Tarryn Thomas had his best game yet and the general ground pressure – non-existent against Fremantle, Brisbane and Hawthorn – returned to a level akin to the start of last year.

Matt Crouch, frequently able to play his own game against North, had little effect. Brad Crouch spent time forward, seemingly hampered a little by a knock to the nose earlier in the game. And in replacing Bryce Gibbs with Cam Ellis-Yolmen to do a tagging role on Ben Cunnington, Adelaide had one less option to drive play on-ball.

So with North controlling play around stoppages and contests, Adelaide’s option was to move it quickly when they did get possession and put their lead-up forwards in the best possible position to succeed…

Taylor Walker, Josh Jenkins and Tom Lynch – lead-up forwards. It’s not breaking news to suggest they’re all at their best when they have a bit of room to work with.

Combine the two, add in Adelaide’s elite trio of half-backs – Rory Laird, Brodie Smith and Wayne Milera – and you’d think it all adds up to a rather straightforward game style when in possession.

At least you’d think so, anyway. Instead what we witnessed was almost a flat-out refusal to take risks, seemingly waiting for North to self-destruct – while not putting any pressure on to force it.

Chipping the ball from side to side in non-threatening areas doesn’t put any pressure on a team defence. Taking play to it does.

It was bizarre, and the only explanation I can come up with was that it was an overcorrection after saying ‘we moved the ball too fast at times’ against Geelong.

Here are Adelaide’s goals* back-to-back. How many of them did they actually create from positive play – whether in possession or aggressively creating turnovers? You can’t win games without consistently having at least one of those two.

(*The last one was for Tarrant grabbing Walker’s jumper slightly off the ball, which the cameras didn’t pick up)

This point really deserves its own separate post and explanation, given it’s a trend which is spreading throughout the league.

Nevertheless, with teams pressing more than ever – except Adelaide, I guess – they’re relying on creating chaos and then thriving off it. It’s why teams score more from turnovers than from clearances.

The reaction to that across the league has been to figure out ways to remove chaos from the game. A line from Arsene Wenger has always stuck with me. In The Mixer – one of the best sports books going around – he said:

In this case, attack created the problem of manic pressure. Defence is now responding by figuring out how to do one – or both – of the following:

More and more, we’re seeing teams elect to use a kick-mark strategy – and possession in general – as a defensive measure.

It’s because if play is slow, teams can move the ball forward with cover behind them. Then if/when they do turn it over, they don’t have to worry as much about conceding from a slingshot.

It appears – if I’ve read it correctly – this is what we’ve seen North attempt to bed down in the last three weeks. The kick to handball ratio has shot up dramatically since the Round 1 catastrophe, where reports suggested North actually forgot what the point of feet were in a game of Australian Rules Football.

It happened for about a quarter and a half against Brisbane, a little more than a half against Hawthorn and for roughly three quarters against Adelaide.

To slip right into armchair coach mode, it looks to be the best strategy for this group of players – as long as the right balance is struck between when to go slow and when to move with purpose.

I’ll expand on this whole strategy in the near future, but if you squint you can see what North is trying to put together this year with a combination of controlling tempo, midfield pressure and outside runners. The only problem is that the midfield pressure is most important, and it was barely seen in the first three rounds.

Next up is Essendon on Good Friday, and North has to continue playing the same way if it wants a chance to beat the Bombers. Playing fast against Essendon would lead to a massacre, and some kind of Good Friday/Jesus joke that I’m not quite smart enough to put together.

2 thoughts on “Round 4: The pressure released”