An unintentional side effect of success is how it shifts expectations. Sometimes they’re right to be shifted. Other times it creates an illusion of a perfect house … until you look at it from another angle and you realise it’s actually a house of cards.

Picture this. It’s the day after North Melbourne lost to Richmond in the JLT Series. You’re asked the following question.

“How do you think we’ll go against Collingwood if they’re top four and have won eight of the last nine coming into the match?”

If I was in private, my initial reaction may have been to crawl into the foetal position. Yet in the present day, heading into Saturday with a 9-7 record, there was cautious optimism. 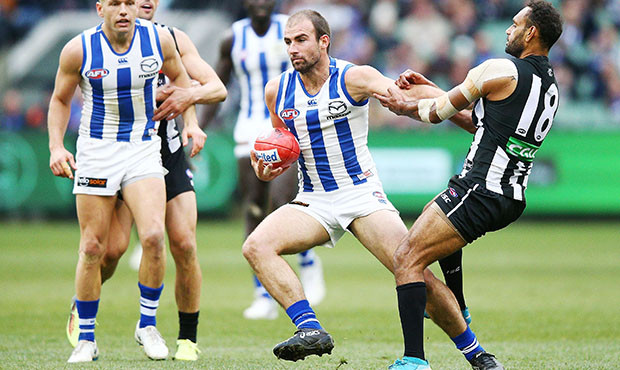 Then the first quarter happened.

It only got worse on the scoreboard from there, with just about every flaw brutally exposed in what – let’s be honest – was a dreadful performance.

It’s right to be annoyed, frustrated, bewildered and all of those negative descriptors when recalling the afternoon, because it was wildly out of character with what we’ve watched all season.

But once the venting is out of the way, let’s get down to business with constructive talk; it’s important to recognise two things.

Firstly, one match doesn’t wipe away the work done in the first 17 rounds of 2018.

It appears that four pieces of the midfield for at least the medium term have been unlocked. Jed Anderson has averaged more than 20 disposals a game (excluding the injury interruption in Round 11).

Paul Ahern looks alarmingly comfortable at AFL level, and he still has a ton of improvement which will come with another full pre-season and the natural fitness gains that come along with it.

Luke Davies-Uniacke has shown enough glimpses to suggest he’ll be a fixture with another couple of pre-seasons under his belt. My opinion is that glimpses are all you need in a first season – he’s 19 years old, still a kid and playing as a pure midfielder against hardened bodies. He’ll be much better for the experience.

Jy Simpkin, even allowing for a quiet last month, is another who has impressed running through the middle. Perhaps his future role is more midfield-forward rather than solely on-ball, but that will sort itself out over time.

It’s a fine line between valuable games of experience for youngsters and gifting them appearances when they shouldn’t be in the side. In Simpkin’s case this year is clearly the former, and working through this current patch will benefit him in the long run.

The key position stocks are healthy; boosted by Majak Daw’s year to date. Ed Vickers-Willis is the perfect third tall defender for the current game, as long as we all cross our fingers and toes to ensure he stays healthy.

As strange as the following feels to state as a positive; the year has also clarified the genuine areas of need – primarily the need for more outside run and a small forward with genuine goal sense. If you can have a year which isn’t a write off on-field, unearth building blocks and also hone in on where to improve – all without throwing away any golden opportunities – I’d take that when the dust settles.

Secondly, and here’s where we get a little philosophical, for some reason every side has at least one game each season that’s a complete write-off. And to be clear, I’m not brushing aside North’s performance. But consider the following games, which are open to interpretation, in order of how the top eight sits on Sunday morning:

There’ll be different opinions on a few of the above, which is to be expected. But the general point is in each of those games, the side didn’t look like they were at the races, to use the standard cliché.

Even last year, Richmond famously trailed by 87 points early in the third quarter against St Kilda in Round 16. 10 matches later the supporter base was sending Swan St into meltdown after a remarkable premiership run.

If anyone knew what causes these days, they’d be a billionaire and not writing a blog. And delving into psychology without direct quotes and access into the team camp is just setting myself up for failure. 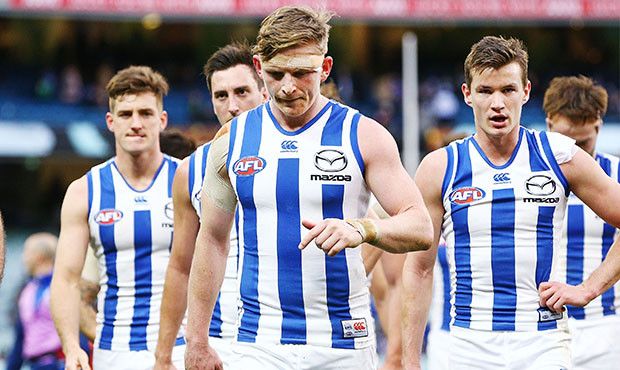 But – but – there are a few trends we can spot from the listed matches this season. For Sydney, North and Collingwood, their let downs came the week after a high-intensity clash at manic pace.

West Coast and Richmond’s low points were also the week after a high-intensity clash, but with the manic pace replaced by a bruising slugfest and travel thrown into the mix – the former having to return home for the following week and the latter jetting out to a new stadium.

Some are still relatively unexplainable – Port Adelaide kicking three goals in two and a half quarters when backing up from a routine win is confusing, and similarly for Geelong the week after leading nearly wire to wire against the Magpies.

If you judged any of these teams solely on their one listed game, you’d think they were bottom feeders. But all teams have their days, much like North did on Saturday.

Put it in the bigger picture, as I’ve preached so often over the course of the year, and there’s no reason to be alarmed.

One thought on “Round 18: Unintended consequences”