What a huge game at Etihad Stadium. A win, and North Melbourne is just one game off second. Second.

A loss, and North ends the weekend outside the eight, and possibly as low as 10th. It’s high stakes in the middle match of a season-defining three-game stretch. 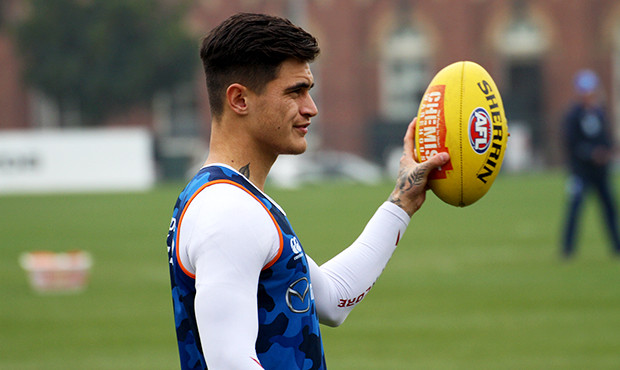 For any new readers on The Shinboner, the game day preview pieces are a primer for the action. It’s a series of questions and potential storylines to ponder as you head into the ground today.

How will North stop Essendon’s half backs?

When Essendon plays well, it’s because it owns the corridor, plays aggressively and moves the ball at speed.

This is largely done from half-back, with the likes of Adam Saad and Connor McKenna leading the way. In lieu of forcing you to watch a multi-minute Essendon highlight package, here’s just one gif which tells the story.

Of course, it’s not always that easy for Essendon, but you can see the general mindset of working it into the middle and then taking off with overlap runners where possible, with the end goal of finding a one-on-one in space in the forward 50.

It’s why Kayne Turner, Nathan Hrovat and Shaun Atley are – in my opinion – North’s three most important players today. If the trio can stop the above from happening frequently, Essendon’s ball movement devolves into slow, kick-mark territory, evoking memories of North Melbourne circa 2006.

The game is halfway won for North if it can force Essendon into that type of movement. It then means the Bombers’ inside 50 entries are slow and laboured, which will suit Robbie Tarrant, Scott Thompson and Majak Daw down to the ground. Or ‘up in the air’ would probably make more sense, come to think of it.

Essendon’s best performances this year have been based on early game explosions. An opening burst against Port Adelaide in Round 4, even better against Geelong in Round 9, and then the capper against West Coast last week with six unanswered first quarter goals, and the first eight of the game in total.

In each of the Bombers’ last five wins, they’ve been ahead at quarter time. On the other side, North’s last two first quarters haven’t inspired a lot of confidence. It was missed chances galore against Geelong (1.6 to 4.4) before being out-pressured by the Bulldogs (1.1 to 2.1).

You can normally tell within the first 15-20 minutes if Essendon is ‘on’ or not, as simplistic as it sounds. It’s why the Bombers haven’t been in a close game since the season opener. If North hits early and often it has the chance to establish the tempo. But if it’s a third consecutive poor start…

Will Ryan Clarke make the most of his midfield chance?

As was touched on a fortnight ago when we revisited the pre-season depth chart, Clarke’s way back into the AFL side was through the midfield.

Promising VFL form has earned Clarke a recall in what we all can agree is his natural position. Judging by the team which has been picked, the 21-year-old’s primary responsibility is going to be to link up and break lines, being almost a straight swap for the injured Billy Hartung.

We know Clarke has that in his locker, and also possesses the ability to win high possession numbers. He’ll likely get at least a fortnight to show he deserves the spot. A string of good performances adds another legitimate player to the midfield rotations and lengthens its depth – arguably the main long-term goal North is lookingaccomplish on-field in 2018.

How will Cale Hooker be treated?

Teams place some in-game incidents into the memory bank and file them away for the next time they meet. I’d be willing to say Cale Hooker’s carry on in the corresponding match last year was definitely one of those incidents.

Before anyone goes too over the top, Hooker’s banter/sledging was a normal part of the game, carrying on in the face of Dan Nielson after each of his four final quarter goals. But any time you can be compared to Brett Lee’s wicket celebrations after blasting out a poor number 11, it’ll be something which will stick in the mind.

Now that Hooker has returned to defence, there is every chance he’ll be set upon if he gets an early goal kicked on him. That should spark a fun reaction from everyone on the field and in the stands.

Yes. The answer to this one is always yes.