Make it 11 wins from North Melbourne’s last 13 games at Blundstone Arena, with a never troubled, almost wire to wire 86-point victory over Carlton on Saturday night.

It was the first time in more than 12 months North had to kick against the wind in the first quarter in Hobart, which naturally raised some questions over how it would defend.

There shouldn’t have been any worries, because the structure was perfect right from the outset. Numbers deep – more so than you’d find at any other ground – prevented Carlton from kicking long to the hot spot, while there was enough pressure around the ball to stop the Blues from moving it freely from the source.

Carlton kicked the first goal, and North didn’t get its first on the board until almost the halfway mark of the term. Yet it was those minutes at the beginning which established the game flow. 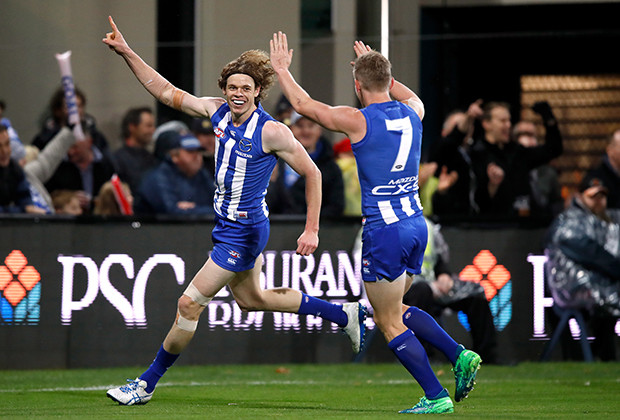 The Blues came into the game low on confidence – likely more so after seeing Marc Murphy as an extremely late withdrawal – so to win the toss and kick with the wind would have given them a boost after seeing what it has done for sides in previous matches. Then when they look at the scoreboard halfway through the first quarter they see they’re trailing by three points.

Not surprisingly, North then had 10 of the last 12 inside 50’s of the quarter and led by 23 points at quarter time – against the wind. It wasn’t as strong as previous matches at the ground, but it was still worth at least two to three goals.

A stat to demonstrate how thoroughly North put its stamp on the game in the first term:

When sides kicked with the wind at Blundstone Arena in 2017, they averaged almost nine scoring shots per quarter. In the first quarter on Saturday night, Carlton had one. One.

After a brief scare in the first few minutes of the second quarter, normal service was resumed for the rest of the night. Here is where I want to highlight Jed Anderson’s game.

Going into the night, his career high disposal tally was 16. He had 23 against the Blues, to go with five tackles and a goal. Yet what stood out the most won’t be registered on any stat sheet.

That sort of willingness to put his body on the line is what makes a team better. Anderson had no right to win the ball, but getting in to push it out to where North had numbers eventually meant a Shaun Atley goal, and sparked a run of five goals in a row which stretched the margin to 46 points.

You had Ben Brown running riot, kicking bananas from everywhere. He now has 15 goals in his last three matches; his consistency is something to behold. Since the 2016 Elimination Final, Brown has only been held goalless twice. Once was when he was knocked out against Collingwood, and the other was in the swamp at Cairns. He’s kicked at least four goals in 10 of the remaining 24 matches.

But onto the passage of play where North truly broke Carlton, and it was done early in the third quarter without the Roos having any disposals themselves.

Sides will come out after the long break with some renewed energy at least, regardless of the score. They’ll be rested, have clear instructions from the coaches and an idea of how to implement it.

For Carlton it was to possess the ball, slow the game down and break down North’s defence patiently. In many ways, it was similar to how it ran down a 45-point deficit in last year’s meeting.

The Blues had an unbroken stretch of 12 disposals and 10 marks early in the quarter. For all their effort, it got them from the back pocket to a boundary throw in about 70 out from their goal. Here is how it unfolded, sped up of course so you don’t have to watch it in real time.

The last quarter was the last quarter; you can’t take much out of it. Let’s finish with two gifs to enjoy, and a reminder to come back on Monday morning for a post on North Melbourne and Blundstone Arena.

For those who haven’t seen the match previews, we pose five questions pre-match which we come back to here.

What will North’s mentality be? It was ideal right from the outset, based on winning the ball at the contest and not allowing Carlton to get a look in. A +30 in contested possession tells you everything you need to know.

How will North move the ball? Perfectly for the conditions, it moved Carlton’s defence around at will. It was like a cricket game where a fielder gets moved from the covers, and then the next ball the batsman pushes it through the covers. As the Blues plugged one hole, North would ensure another popped up.

Is there going to be a late change? It was as selected for North, and all worked to perfection. Majak Daw looked more comfortable with both Robbie Tarrant and Scott Thompson alongside him.

How long does it take Carlton to adjust to the ground? It never did, and it’s a big reason why the score blew out as it did. It probably could have been a 100-point job if North kept pushing to the final siren, but it understandably eased off.

What’s your prediction? Pre-match I had North by 29 points, with a 30 disposal, 10 clearance game from Ben Cunnington.

Turns out the 30+ disposal, 10+ clearance game came from Shaun Higgins; the clear, undisputed best on ground. Lock him in for three votes on Brownlow Medal night.

4 thoughts on “Round 4: Southern Comfort”