The morning of Round 9, 2017, when North Melbourne was playing Melbourne, I was immediately thinking of how to approach social media posts that evening after we’d won.

The morning of each opening round between 2012 and 2016, I was thinking of how to approach social media posts that evening after we’d lost.

My point here is winning and losing streaks change expectations while affecting teams and people in different ways. With #18 a possibility this Saturday at the MCG, you know it’s going to be the pre-match storyline.

Last Saturday was our most-viewed day since The Shinboner was relaunched; a huge thank you to everyone who’s been reading. You can subscribe to The Shinboner via email on your right (on desktop) or below this post (on mobile). If you’re on Twitter you can follow me @rickm18 and to share this post on social media, you can use any of the buttons at the bottom of this post. And as always, any suggestions for what you’d like to see on here are more than welcome.

At the start of the week, both sets of players and coaches were undoubtedly messaged to play the streak down as much as possible, at most giving it a cursory acknowledgement in fear of giving the opposition bulletin board material – unless you’re Jake Melksham anyway.

The truth is its on everyone’s minds, and it’ll be mentioned repeatedly behind closed doors at Arden Street and AAMI Park, either in team meetings, amongst staff or the players talking to each other.

In recent years the streak has been gaining a life of its own as the number gets bigger and bigger. This means more attention on it, which then means it forms more of the pre-match preparation, whether consciously or subconsciously.

With that in mind, perhaps it’s no coincidence the last time North Melbourne trailed Melbourne at quarter time was in 2011. 2011! It’s so long ago only six Roos (Atley, Goldstein, Macmillan, Thompson, Wright, Ziebell) from the day are still on the list, and just two Dees (Jetta, Jones).

Here’s where the crowd comes into it. If it’s just another game, there are no dramas around the score at the first break unless it’s something extraordinary. But this streak changes everything.

The atmosphere at a game plays an influence on proceedings, and as soon as North gets a lead, the fans grow in confidence. As soon as Melbourne falls behind, the murmurs and discontent grow louder from the MCC. You see interesting things looking out into the MCC from the MCG press box.

The players feel the atmosphere and feed off it if it’s positive. Conversely, if its negative it can also play havoc with their mindset. Was anyone at Etihad Stadium last week filled with confidence when there was a set shot in the first half? Exactly.

But confidence and momentum are strange things, and once they’re in your favour you can start running downhill quickly.

For example, the 2016 season opener against Adelaide was one which gave North great confidence. Again, if you look at the lead up there was next to nothing out of the ordinary being said by the players.

Afterwards Boomer said, ‘winning in Round 1 is like winning a final’, and that came from the relief of finally getting points to start the season for the first time in seven years. It’s my belief the subsequent winning streak was underpinned by the belief the team gained from beating Adelaide to start with.

Or let’s go back a bit further to the 1990’s, when North snapped a 14-game losing streak against Hawthorn to the tune of approximately 652 points (note: it was 127, but when the numbers get that high they’re all the same).

It was based off having momentum – five goals ahead at quarter time – which then gave the side the confidence it could be the day. Once you have confidence and momentum, not many teams can be stopped.

North goes into Saturday with the confidence. Can it stop Melbourne from getting the momentum to turn it around? 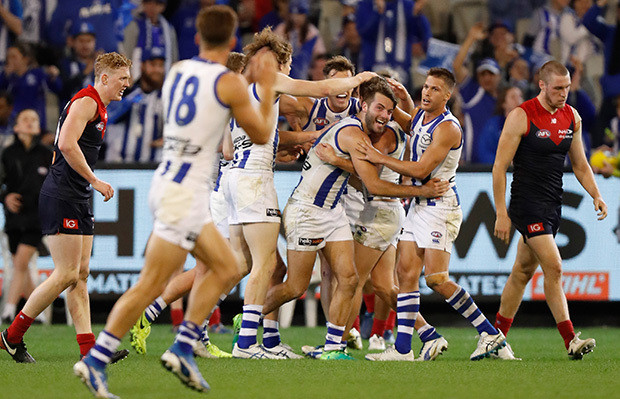 One thought on “What does a streak mean?”